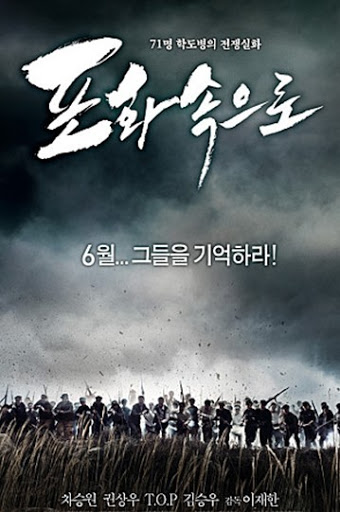 June 25, 1950, at 4 a.m. The Korean War begins, which no one expected.
Armed with overwhelming firepower, North Korean troops continue to march southward, and the South Korean military’s defeat is only deepening.

As the world is gripped by fears of World War III, the United Nations decides to send a huge number of coalition troops to South Korea.
The South, which already has nowhere to back down, puts all its energy on the Nakdong River’s defense as it waits for the arrival of the Allied forces and brings the remaining forces there.

The unit of Kang Seok-dae (Kim Seung-woo), who was guarding Pohang, is also ordered to rally to defend the Nakdong River.
However, Pohang, which has become the front line of the front line, cannot be left empty.
Kang Seok-dae is forced to leave 71 student soldiers there who have never been caught properly.
Jang Beom (T.O.P.) is appointed as a company commander because he has only followed the battle, but the group of Gabjo (Kwon Sang-woo), who volunteered for the war instead of being taken to the juvenile detention center, openly ignores him.

The 71 boys, who finished their shooting training by firing a bullet, wait for the battalion’s return without knowing what will happen in the future in empty Pohang, where both refugees and soldiers left.
Led by Pak Mu-rang (Cha Seung-won), the leader of the North Korean army’s advance team that devastated Yeongdeok City, 안전공원 the North Korean People’s Army 766th guerrilla group defies the party’s order to head to the Nakdong River and secretly turns to Pohang.

Its strategy is to take down Busan, its last destination, in the shortest time possible via Yeongdeok to Pohang. Park Mu-rang’s troops enter Pohang in an instant, and the 71 boys who remained at Pohang Girls’ Middle School, where the Defense Forces Command was located, wake up at the sound of a piercing through darkness in the middle of the night.
In Pohang, where there was silence, there was now a huge war cloud, and Captain Kang Seok-dae, who was deployed to the Nakdong River front, had to confront the troops of the People’s Army, who gathered every moment without any time to worry about the students.