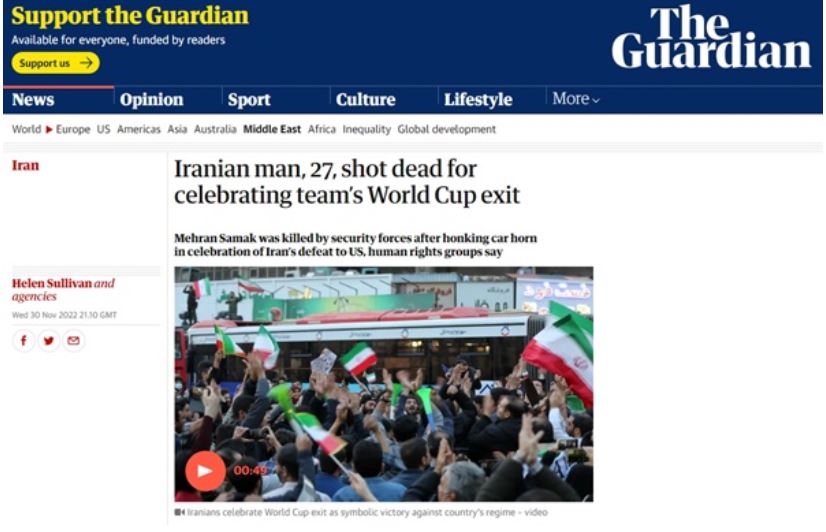 When Iran’s national soccer team failed to advance to the round of 16 at the 2022 Qatar World Cup, a man who was cheering for it was shot dead by police.

In the northern Iranian city of Bandar Anjali, a 27-year-old man, Mehran Desert, was shot dead by Iranian security forces while celebrating with his car horn as Iran’s national team was confirmed to be eliminated in the group stage after losing 0-1 to the U.S.

Iranian national team player, a friend of the man who was shot, “The truth will be revealed.”

In Iran, massive anti-government protests have continued in the wake of the September incident in which Mahsa Amini, a woman in her 20s, was arrested by police for not properly wearing hijab (traditional clothes used by Muslim women to cover her head and neck) in downtown Tehran.

As the Iranian government defined the protests as “riot” and launched a hard-line crackdown, at least 448 protesters have been killed and 18,000 have been detained so far, according to the IHR.

Coincidentally, after being shot by security forces, Desert was a friend of Iranian midfielder Saeed Ezatolich, who competed in the Qatar World Cup. Ezatolich expressed his sadness by posting photos of desert and youth soccer teams together on his social media.

“I’m heartbroken by the sad news that I’ve lost you,” Ezatolich said. “One day, the mask will come off and the truth will come out, and there’s no reason for our young people and our country to suffer this.”

In Iran, when the Iranian national team was eliminated after losing to the U.S., citizens took to the streets and cheered with fireworks. Many Iranians are refusing to cheer, believing that the Iranian government is using the national soccer team as a propaganda tool in the international community.

According to CNN, a man in his 20s living in Tehran, the capital of Iran, said, “The victory of the Iranian national team will be a gift to the Iranian government,” adding, “I hope Iran will be eliminated.”

BBC reported, “There is a situation that the Iranian government pressured the players to torture their families if they did not sing the national anthem, but Iranian citizens still believe that the national team betrayed the cause.”